In August 2014 Easigrass, the artificial grass company, set up in Dubai to address the growing artificial grass market. Up until this point any artificial turf requirements were being serviced from their London Head Quarters. Operations kicked off in late 2014, since then Easigrass has gone from strength to strength working with some of the most prestigious companies and brands in the UAE.

Some of our installations;

After only one month of operations Easigrass was involved in their first major project which was to replace the existing lawn at famous the Irish Village restaurant in Garhoud. They were initially approached by restaurant manager Dave Cattanach, as he had been struggling for years to keep the lawn looking inviting, green and most importantly alive. Due to the extremely high footfall and traffic at the Irish Village it had become an impossible task so Dave was looking for alternatives. Having explained the resilient nature of the Easi-Mayfair product to the owners of the Irish Village, Dubai Duty Free, they decided to take the plunge and replace the natural grass with Easigrass, artificial grass. Since the artificial grass went in the management have not looked back; one less headache for Dubai’s busiest restaurant! 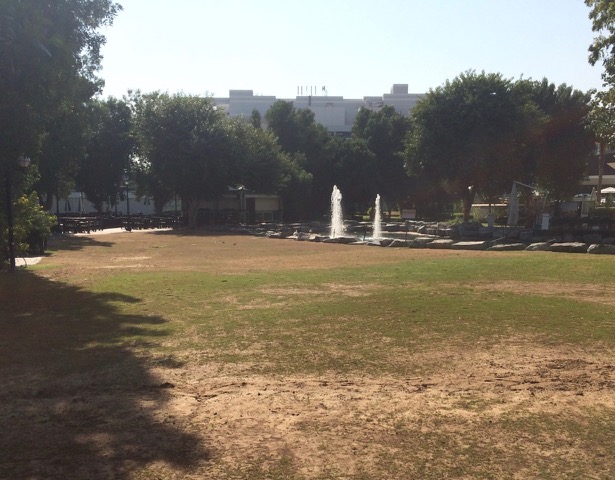 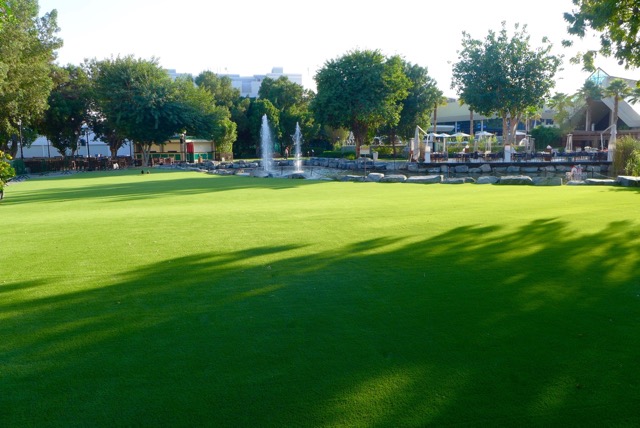 The success of the grass installation at the Irish Village encouraged the management of the adjoining property, The Jumeirah Creekside Hotel, to consider the options for their garden area. They were unable to maximise the potential of the space due to the trees in the middle of the lawn. The trees prevented the events team from being able to set up a proper marquee on a level surface but just as importantly the shade the trees created meant that no light was reaching the natural lawn and it had therefore deteriorated into ugly muddy patches. The plan was to totally redesign this area, remove some of the tree and create a level surface for a large hospitality area where the hotel could host weddings and corporate functions. Easigrass were called in and set to work. Once all the trees had been removed and retaining wall was built the team were able to excavate and level the new 2,000 square metre lawn ready for the artificial turf. The transformation is fantastic and has now given the hotel the perfect entertainment and function space. 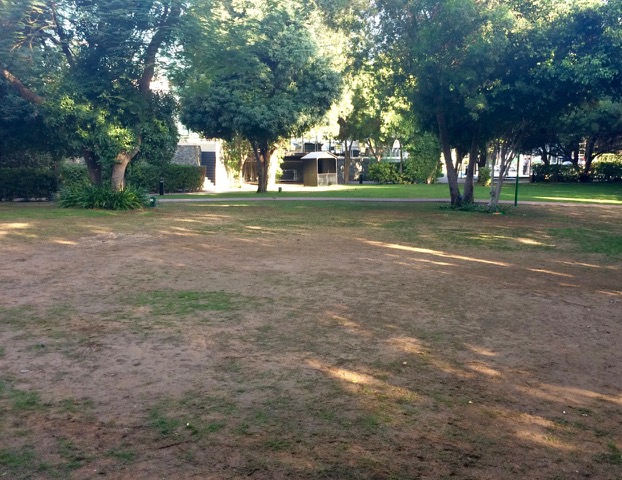 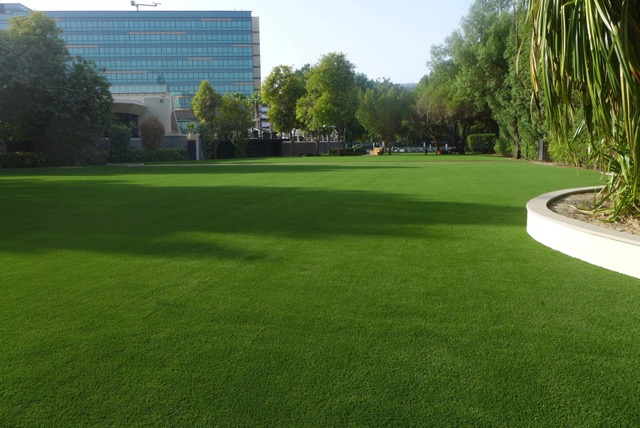 Easigrass were called to The Sofitel Hotel on The Palm Jumeirah to look at the grass areas around the swimming pool. The issue that the landscaping team were facing was that the lawn areas were being destroyed by guests pushing and pulling the heavy sun loungers all day. Inevitably the grass never had time to re-establish so these area became worse and worse until eventually they were nothing but earth and sand. Guests in a 5 star hotel expect the pool areas to be clean and tidy so something needed to be done. Artificial grass seemed like a great solution. Easigrass explained that they infill the grass with silica sand which is a clean, white, round sand. In a normal residential situation they would apply 8kgs per square metre of silica sand to the grass installation but in this case, where the usage and traffic is extremely high, they doubled it to 16kgs per square metre. The sand acts as protection to the base of the system as well keeping the individual blades of grass standing upright. The more sand, the more protection. 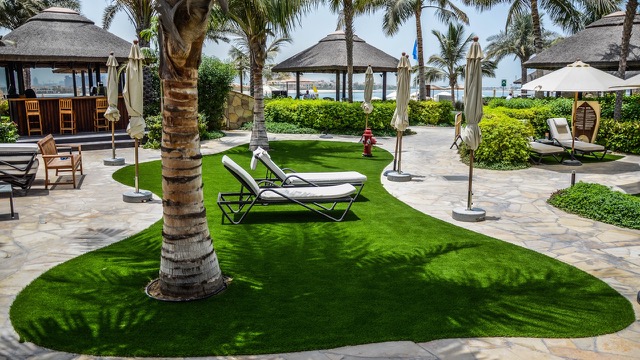 The next interesting project was for the Jumeirah Group and Al Qasr Hotel in the Madinat jumeirah. The Jumeirah management often host weddings at the hotel so they wanted to create a dedicated events venue. The idea was to create a perfectly level lawn area leading directly onto the beach. The problem the hotel had to overcome here is that grass is extremely difficult to grow next to the sea. Not only is it difficult to grow grass in these salty conditions but the grass had to be able to take a high volume of traffic during the events. Easigrass were called in to provide a natural looking alternative to real grass. The landscape team no longer had to worry about maintenance and the events team had a great looking venue every time. 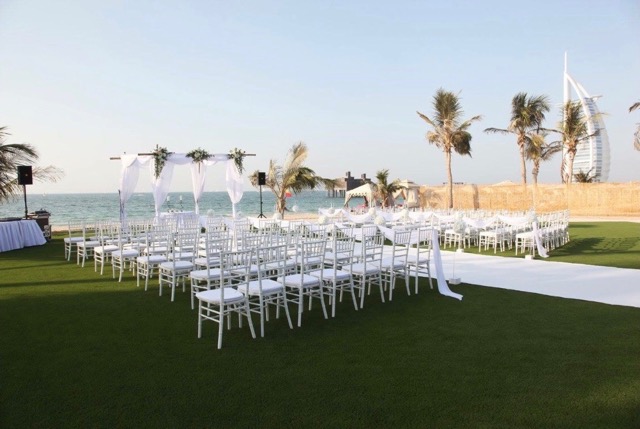 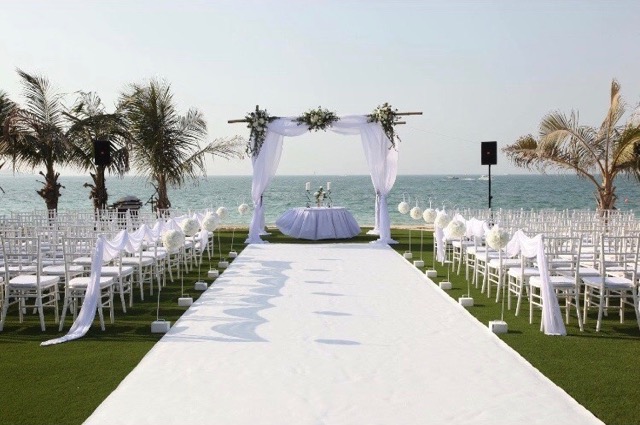 Zero Gravity Beach Club hold the largest weekly party in Dubai. They host some of the biggest DJs in the world and therefore the crowds they entertain are vast. Large crowds means high traffic and the main stage for the nightclub is outside in, what was meant to be, a natural grass area. The grass didn’t stand a chance with the high amount of footfall and it turned to bare earth very quickly. In such a prestigious venue something needed to be done about it. Easigrass suggested the Easi-Mayfair as they knew from their experience with The Irish Village that it would work well. Once the grass was installed the visual transformation was incredible and the nightclub once again had it’s green lawn back, this time to stay. 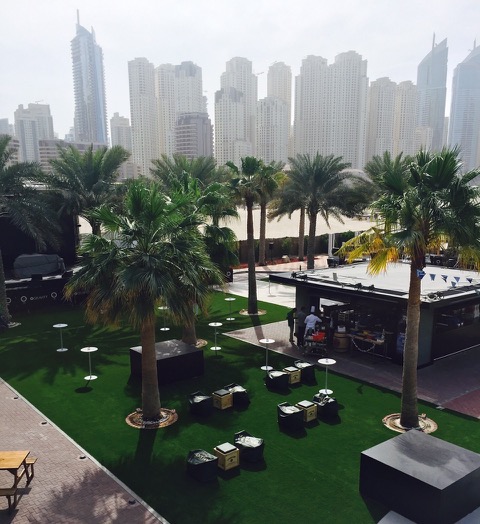 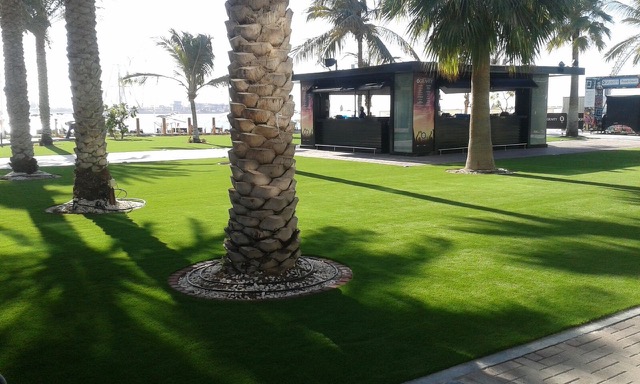 Wild Wadi is all about creating an enchanted atmosphere that seems removed from reality. One of the ways they do this is by making the water park visually interesting and appealing. Easigrass were brought in to look at the area below the Jumeirah Sceirah slide which is the highlight of the park. The problem was that as the guests climbed higher and higher towards the top of the tower the surroundings started to look too hard and intimidating. By simply adding a long, wide strip of Easigrass below the slide the whole area was softened up and made to look more natural. A small touch with such a big impact. 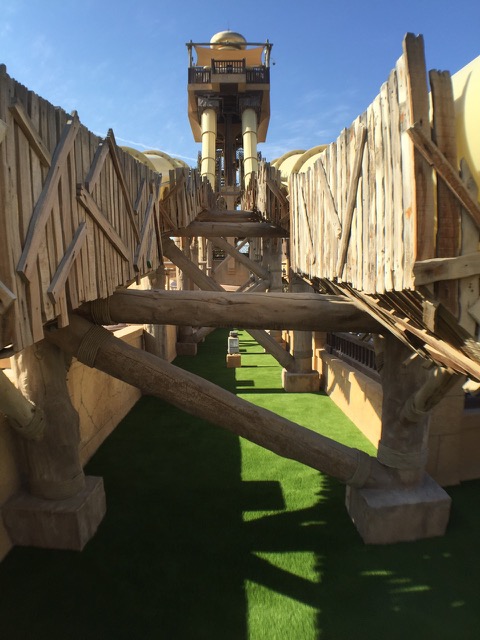 In 2015 the Fort Island in the Madinat Jumeirah was redeveloped in order to increase the space available for entertainment and functions. The new function area needed to be softened but the design team were aware that natural grass would not last five minutes. Easigrass were consulted and the decision was made to use artificial grass instead of natural grass. Once the new Fort was completed it was clear to see the softening effect that the grass had. The artificial grass breaks up the stonework and creates interesting pockets of greenery. When viewed from on top of the Fort the patterns are beautiful. 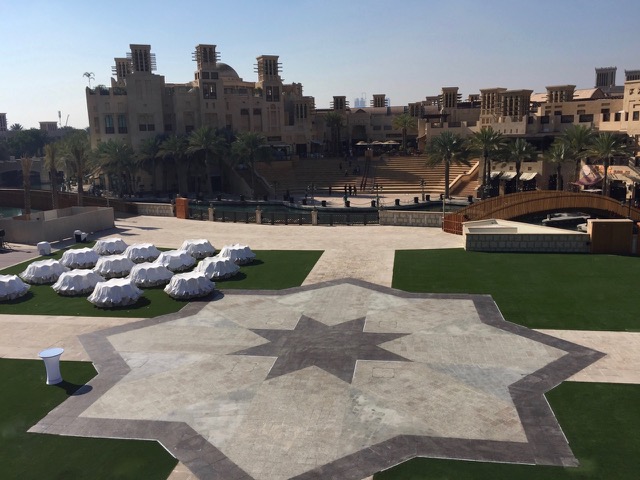 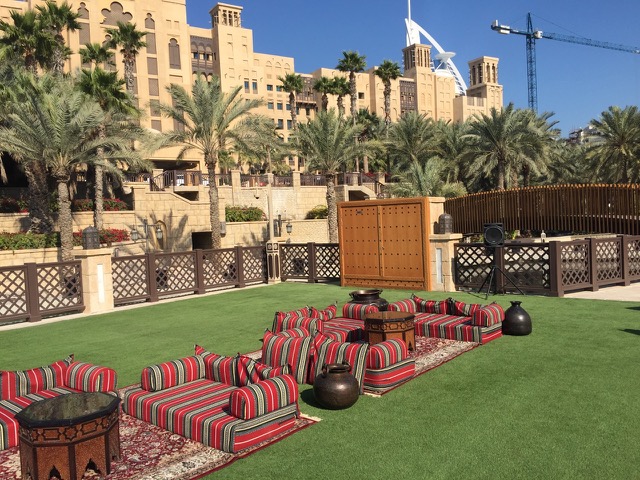 The Du Football Championship Finals at The Dubai Mall