In Early 2015 Easigrass were contacted by leading Global Brand Consultant, Inspiratus. Inspiratus had won the prestigious contract to organise the Du Football Championship. The initial rounds were being held across the UAE leading up to the Finals in The Dubai Mall on March 19th 2016.

Inspriatus tasked Easigrass with installing a football pitch on the ice rink, the catch being that it needed to be done after the Dubai Mall closed at night and before it opened in the following morning.

No problem we thought;

Until we realised that The Dubai Mall shuts at 1am and opens at 9am, giving us a total of 8 hours to install 1,800 square metres of artificial turf. Normally a pitch this size would take on average of a week to install. No problem for Easigrass, we love a challenge!!

In order to speed up the installation process we decided to prefabricate the pitch off site. We hired a car park for 3 days and begun to prepare the turf ready for installation. After 3 solid days of work the grass was rolled up for the last time before the event. 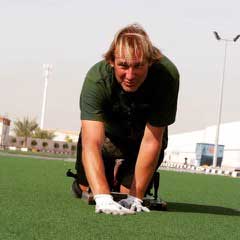 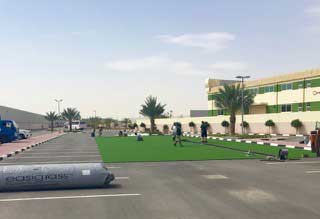 On the night of the event the Team arrived at the Dubai Mall ready to begin the mammoth task of creating a playable football pitch, including all of the line markings, in 8 hours. Luckily, joining our team, were technical specialists, Bas Lodewijkx from Holland and Romulo Chaves from Brazil, 2 of the most experienced artificial grass installers in the world.

One of the biggest tasks we faced was getting the turf into the mall; we had 15 rolls of 15mm Easi-Sport artificial turf, each roll weighing around 350kg, so in total over 5 tonnes of artificial grass.

Once the turf was in place we begun to carefully position it ready to close up the seams. Like a well oiled machine, the rolls went down one by one until we had a beautiful green surface but at this point nothing to show that it was going to be a soccer pitch. In order to get the fake grass down quickly we had to invent some clever contraptions to help us speed things up and the lines were no exception. We don’t want to give away our trade secrets but these were certainly the fastest lines that have ever gone down on an artificial soccer pitch of this size. 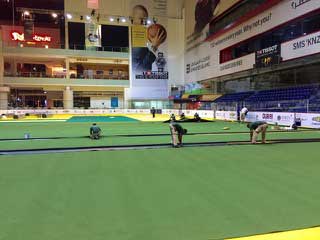 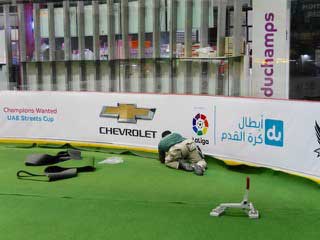 At 8:35am, seven and half hours after starting the installation of the football pitch, we were finished. The sun was up and the Mall was getting ready for another busy day. We even had some for a quick kick about, to test the fake grass, It was definitely NOT for childish fun… well, maybe a bit!

The event was a huge success; Inspiratus created a buzz and atmosphere that had never before been felt in The Dubai Mall. They did an incredible job, so huge congratulations go out to them.

Real Madrid football legends Roberto Carlos and Michel Salgado were at the event for the whole afternoon to support and encourage their teams, so it was great to see them running around performing kick ups and showing off their skills on an artificial pitch Easigrass had installed. 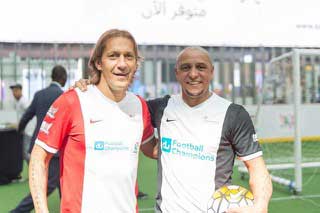 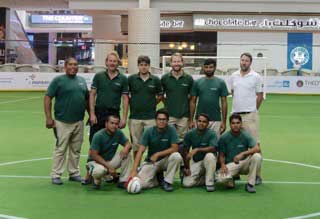 A fantastic event organised by Inspiratus and very proud moment for the Easigrass team. If you missed it this year make sure you come along next year!

How to Install Artificial Turf the Right Way