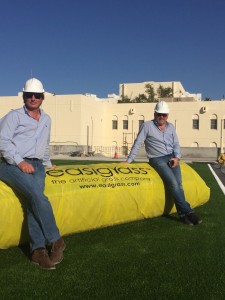 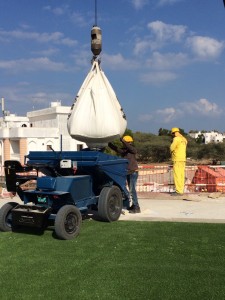 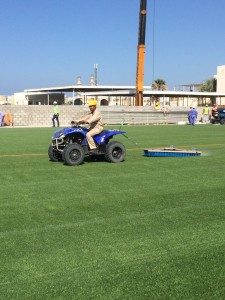 The product chosen by the British School was from the Rhino-Turf (An Easigrass Group Company) VT Range, the VT32. The VT range is a world class range products; it’s extremely resilient and hard wearing yet silky smooth to the touch and has a thick, dense Root-zone built into the synthetic turf. The VT32 is one of the shortest products in the VT range at 32mm; it was chosen as it is suitable for both hockey and football. If the artificial grass was any longer, for example the VT40 (40 mm), it would be too long to play hockey on and the ball wouldn’t roll.

Underneath the artificial grass we used a 12mm closed cell shock pad to improve safety, comfort and performance. Without the shock pad the children would risk injury as the synthetic turf would be directly on top of the hard concrete. 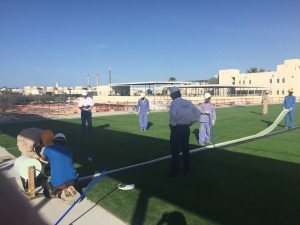 The shock pad was rolled out followed by the turf and the seams immaculately cut in. At this stage the top deck is one huge green carpet. Now it’s time for the lines. With great precision all the lines, hockey and football, were cut into the turf.

So the turf is down, next comes the sand and rubber infill. The giant 1 tonne bags were craned up onto the platform where they were opened into the spreader. The sand is an extremely important part of the whole turf system. The sand falls deep into the pile of the grass and gives the pitch its stability. Without the sand the grass could easily lift up and potentially lift off in very high winds. The sand we use is an imported sand called silica sand; its properties make it the prefect material to stabilise the base. After the sand comes the rubber infill. In this case we used recycled EPDM. Normally, in the UAE, GCC and Dubai companies use SBR rubber which is made from recycled tyres. We don’t use SBR as it can smell, especially when the temperature reaches 50 Degrees. EPDM does not smell so it was our choice for this sports field.

Have a look at this video to see the first time the pitch was used by the kids at the British School.

Easigrass have offices in Dubai, London and South Africa.
www.Rhino-Turf.com

Transform your garden ready for Christmas